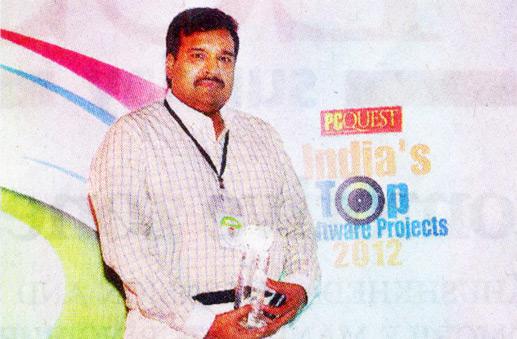 The whole world recognizes India as a software super power, with our software exports mar-

ket having grown by leaps and bounds to more than $60 billion last year. And yet, the real brains behind this achievement go by unnoticed because they work behind the scenes. In this context„ PC Quest, a leading IT magazine, announced to reward the best software projects in the country. A total of hundred plus software projects were nominated from all over India, with public voting and jury selection judging the best project. Bharat Sync Technologies Pvt. Ltd. a Rajasthan-based startup company, won India’s “Top Software Project”.award in an award function held in Mumbai. Dr. Ajay Data, founder and chairman of the company, attend the event and received the award. Bharat Sync software is a mobile apps for push mail and to secure your mobile data i.e. contacts, calendar,tasks and notes over the air (OTA) and get access of entire data through web based dashboard.

This can also synchronise your mobile data with your PC without actually attaching your mobile through cable, all wirelessly. Dr. Ajay Data said, “We support more than 7000 handsets, including Android, Symbian, Blackberry OS, iPhone and other J2ME compliant phones. We have launched this with MTNL Mumbai and Delhi and with BSNL for entire India. Soon private operators are going to launch for their customers. It’s a proud moment for our team and we feel happy to bring some glory for our city Jaipur and Rajasthan state.” Incidentally, Bharat Sync Technologies is promoted by same promoters who started Rajasthan’s first Internet services in the name of Data Ingenious Global Limited (Formerly Known as Data Infosys Limited) and is an IT major from Rajasthan.